It was a week of firsts for Caleb.  (The next post will have details on a swimming first.)

Caleb finally got his chance to pitch for one inning for his little league team.  He struck out 1 boy swinging and he grabbed a grounder right at the mound and threw to first base in time for the  "OUT "!  He was jazzed up over that play. He was feeling pretty important last night.

He has come a long way from watching airplanes while in right field. 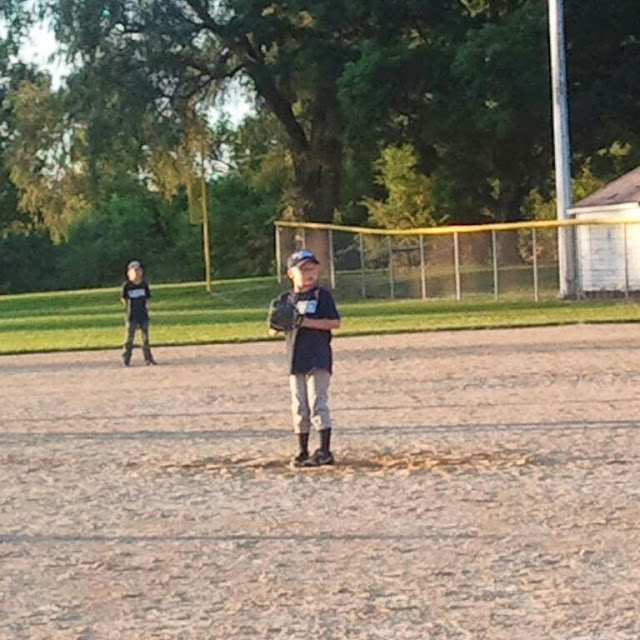 Play Ball! Nathan was the catcher and Caleb was 3rd base. 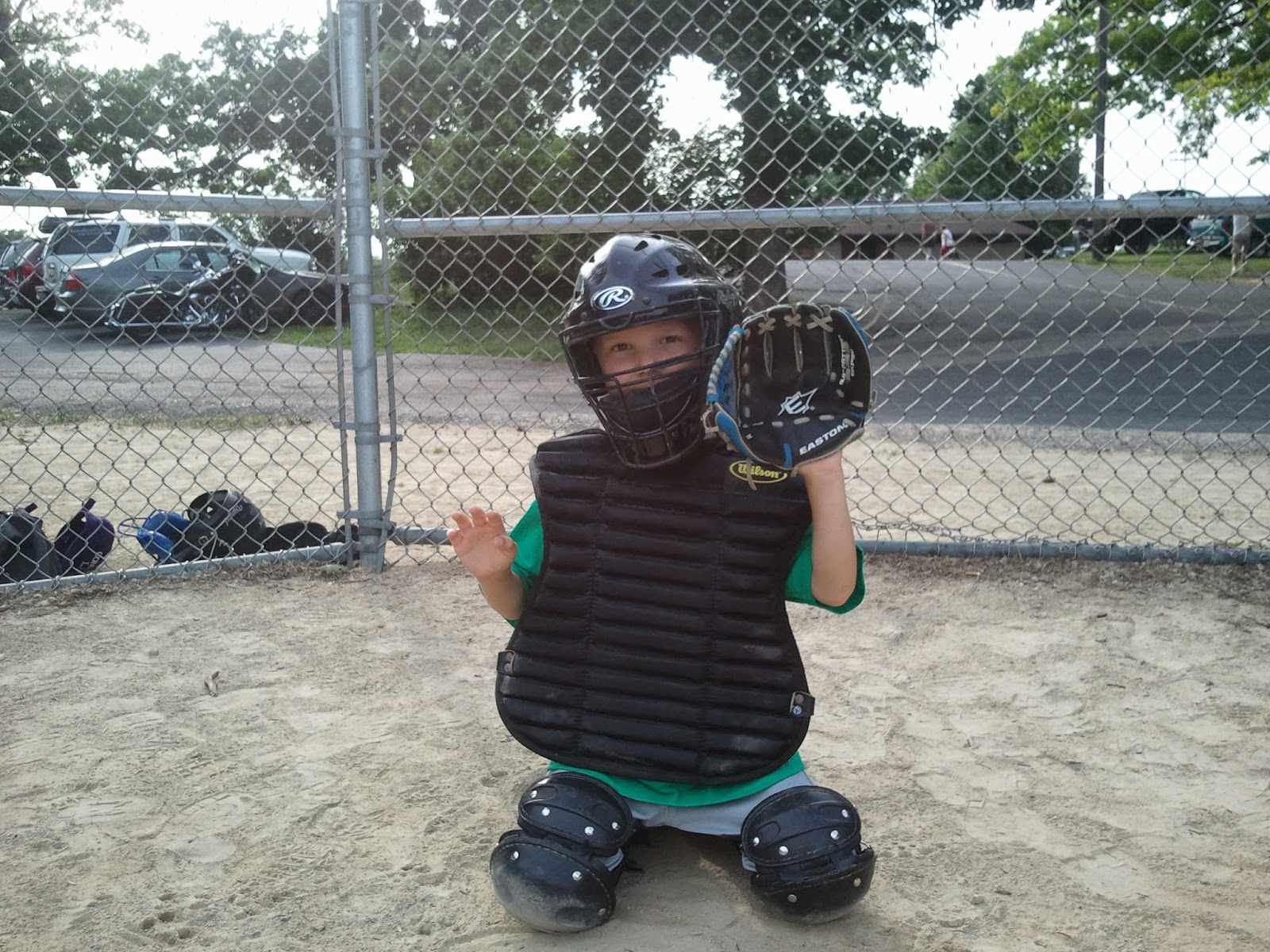 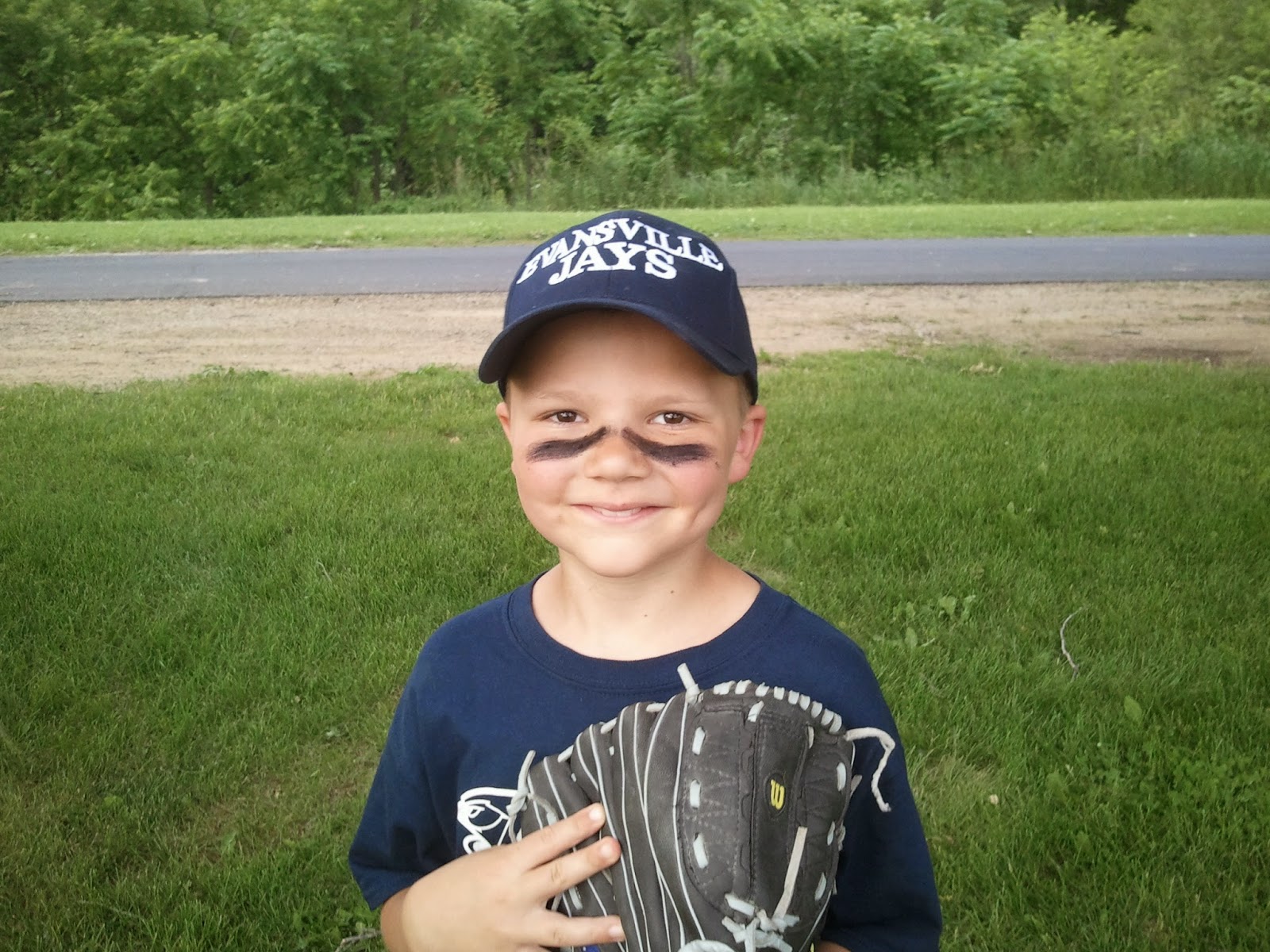 This is the week David waits for all year. The week after his birthday at Crescent Lake Bible Camp.
This year the whole family enjoyed the camp. David spent a week with the middle school group Young Cruisaders.  He was pleased to be in the same cabin with friends from church.  This is old hat for David. He has been there for several years now and knows all the places to go and things to do.
Caleb went for half the week to Jr. camp.  A friend from church was in his cabin and he really enjoyed his councilor Matthew.  Caleb's favorite part was the canteen. (I like to joke that Caleb's love language is food).  He spent his canteen money on toxic waste.  Toxic waste is a sour candy that comes with a challenge.  This is right up Caleb's alley.  Caleb is a foody and he is competative. He was motivated to be a "full toxie head" by enduring the right of passage of horribly sour candy.  This is eye twitching, pucker producing, eyebrow raising sour candy. He loved it. I had to prove my full toxie head status too as did John. Blech! Caleb also tried tubing (he didn't like it)  and the climbing tower. (he loved it) His favorite.camp activity is archery. Caleb is a good shot!
Nathan also attended for half a week for Jr camp.  He also had a buddy from church in his cabin. He is so little in body size but he was so ready for camp.  It was eye opening watching his little body navigate the cafeteria experience. He was all about being one of the big boys.  He was so ready to go to camp. Nathan also did the toxic waste challenge, but spent more of his canteen money on chocolate.  Nathan did not tube but he loved boating and swimming. He also did the climbing tower and archery.
As parents of Jr. campers were were allowed to stay in a guest house and come and go as we pleased.  We were able to join in on any activity the Jr camper was doing (John climbed the tower).  John and I checked out some bikes and joined David at chapel, we joined in on the archery and rockwall climbing and other various activities.
Crescent Lake is a long drive but we are so pleased by their staff,facilities, and food service. I am sure it will be a part of our summers for years to come. 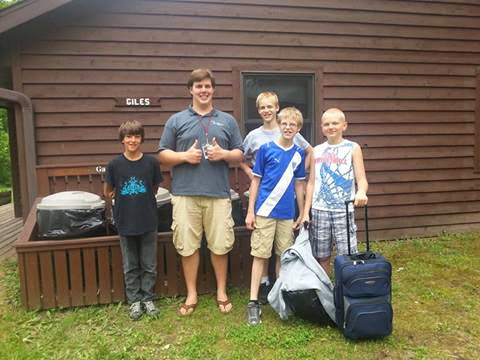 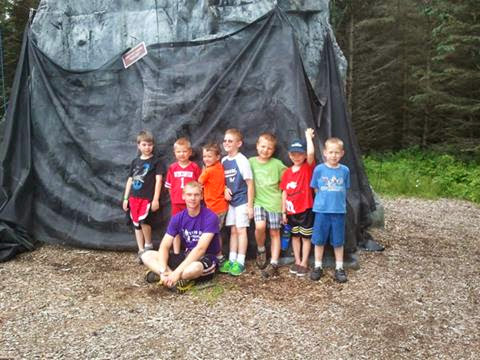 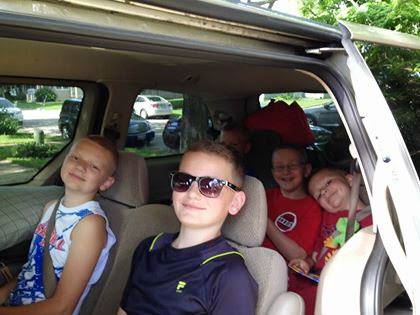 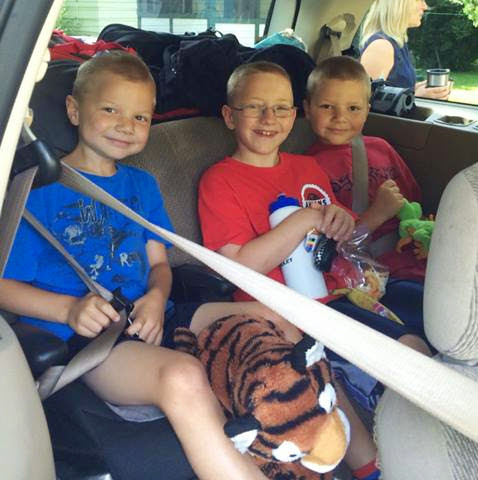 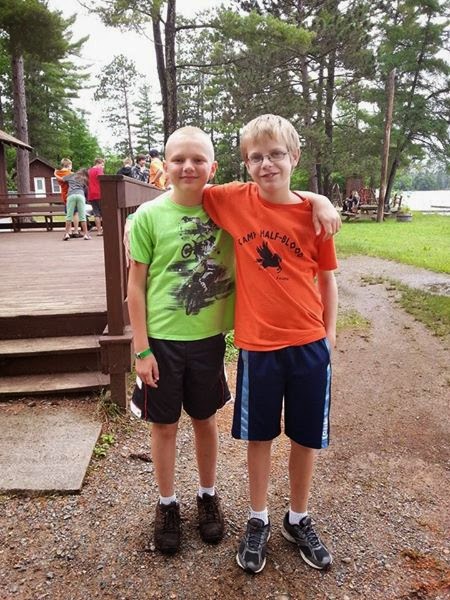 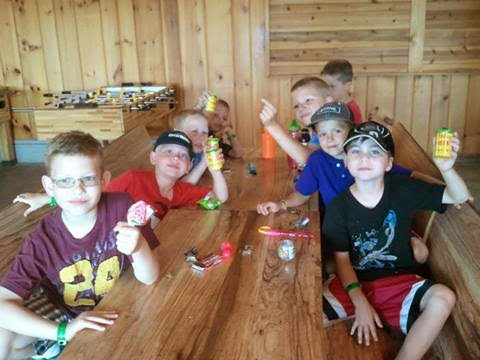 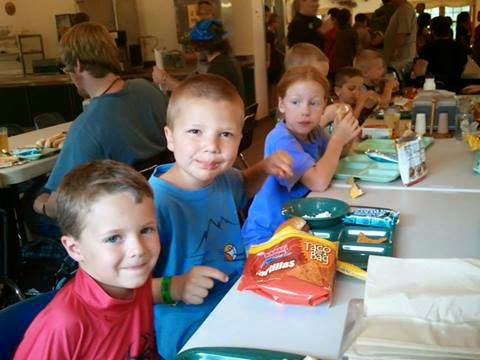 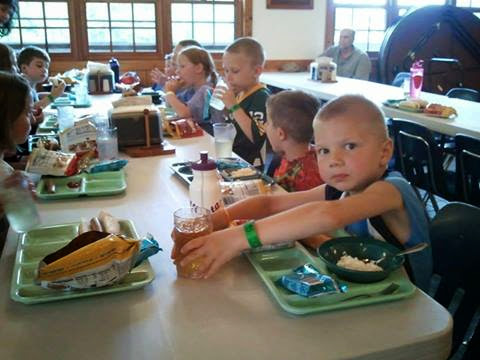 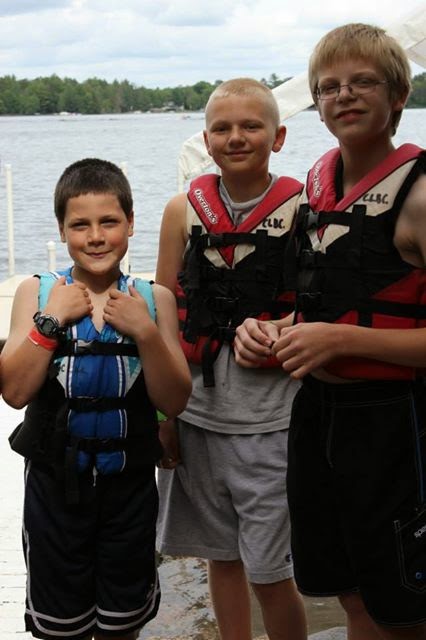 Our second camping trip in June was to Smokey Hollow near Lodi.

Here we rented a covered trail wagon.  Think of going west during the pioneer days and you will be able to picture the wagon we rented.

This was an adventure of a different sort. This was FAR from roughing it.

Devil's Lake we had no electricity. Smokey Hollow we had electricity, bunk beds, a fridge, microwave, and movie rentals.   Ummmm this was NOT how it was for the pioneers! But who cares? Pioneers we are not!

We enjoyed the 3 days and 2 nights with good friends.  Joe and Cassie and their son Miles rented the wagon next to ours.  We went to the beach daily, rode banana bikes, played mini golf, and had an all around great time at Smokey Hollow.  Can you say sunburn? Sunburn!

It was still early June so the water was full of tadpoles. A true boys' delight. Over the 3 days we saw them grow through the stages of frog development.  Can I count that as science class? Who cares? It is summer break! 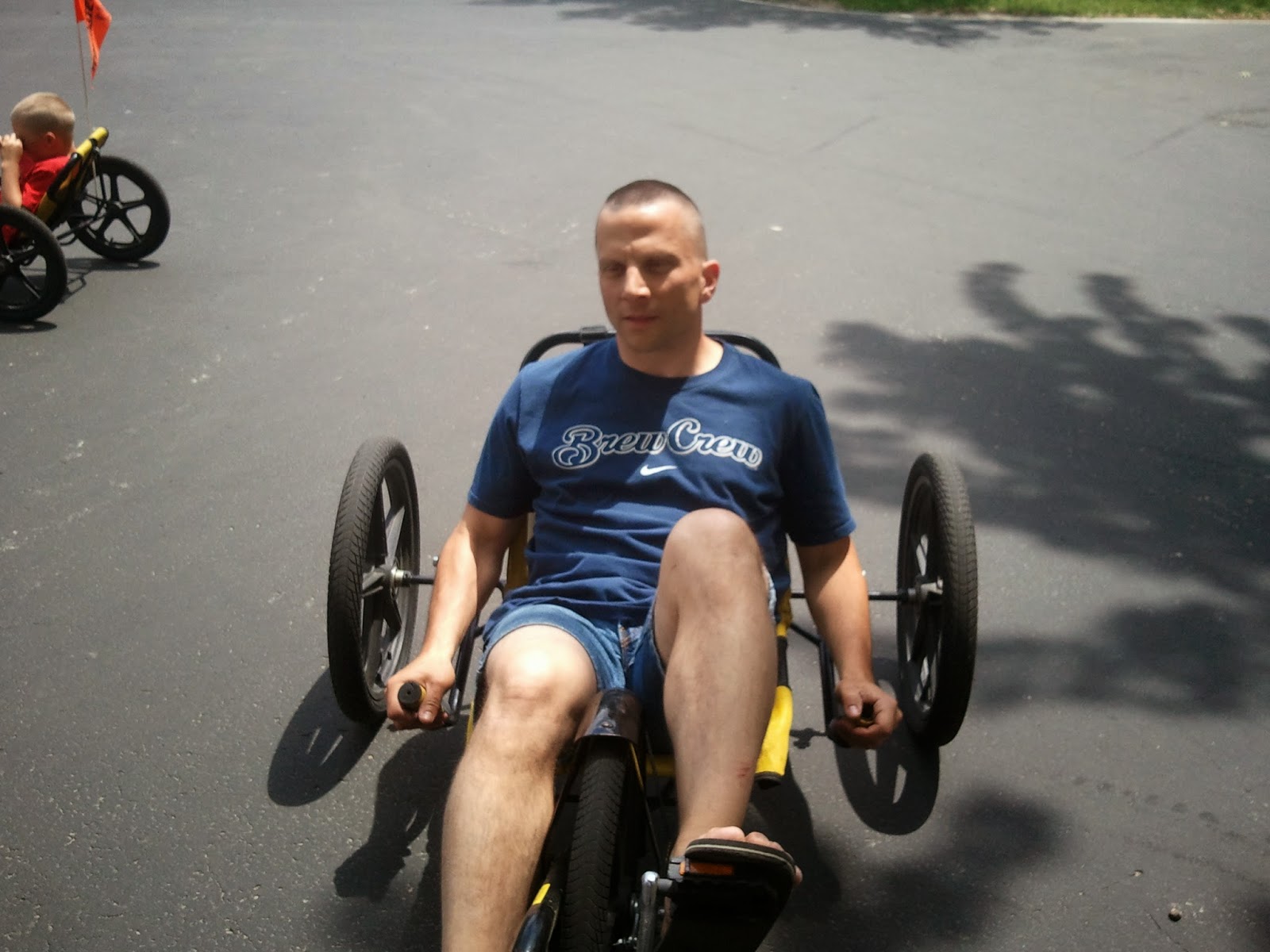 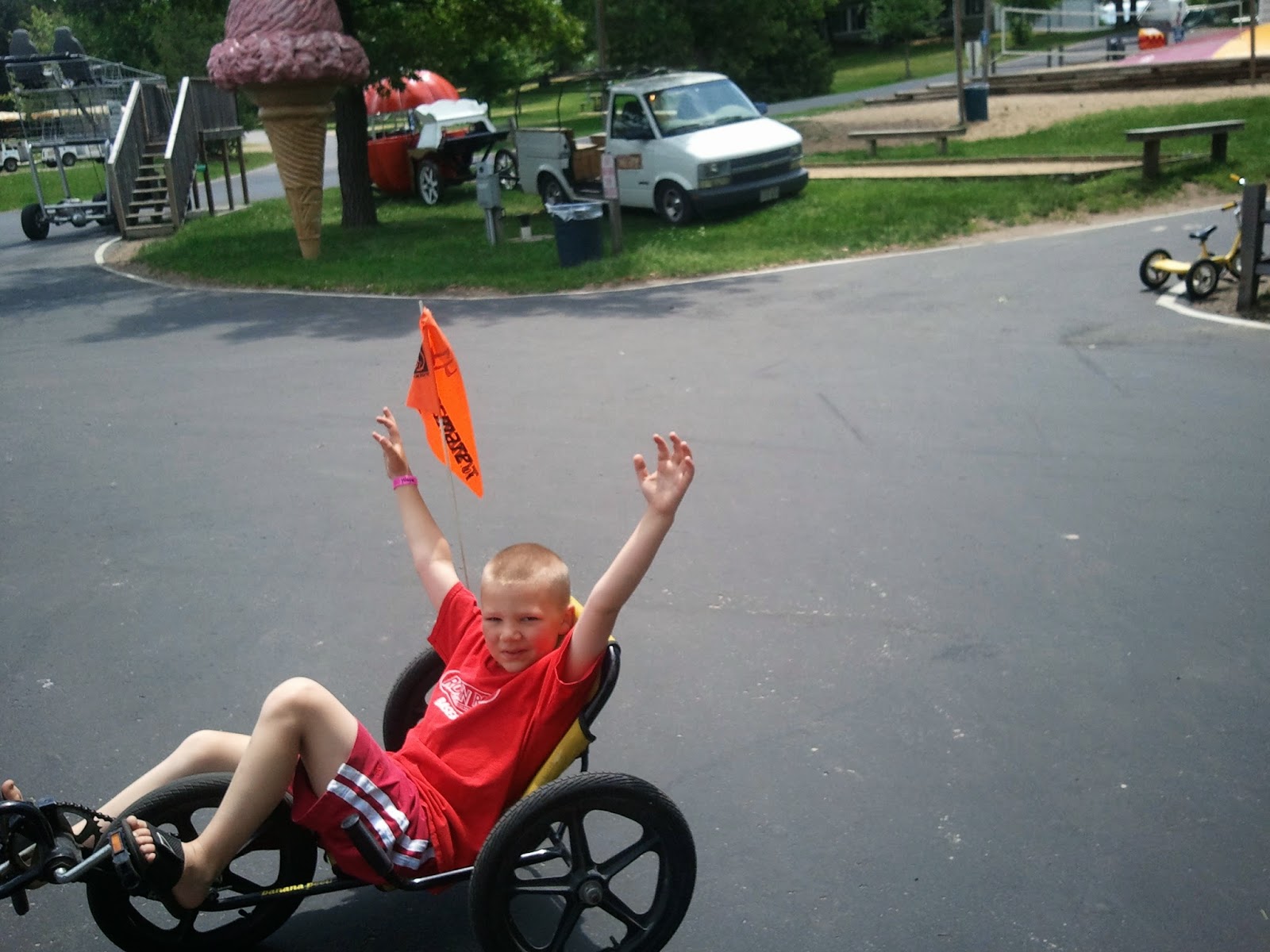 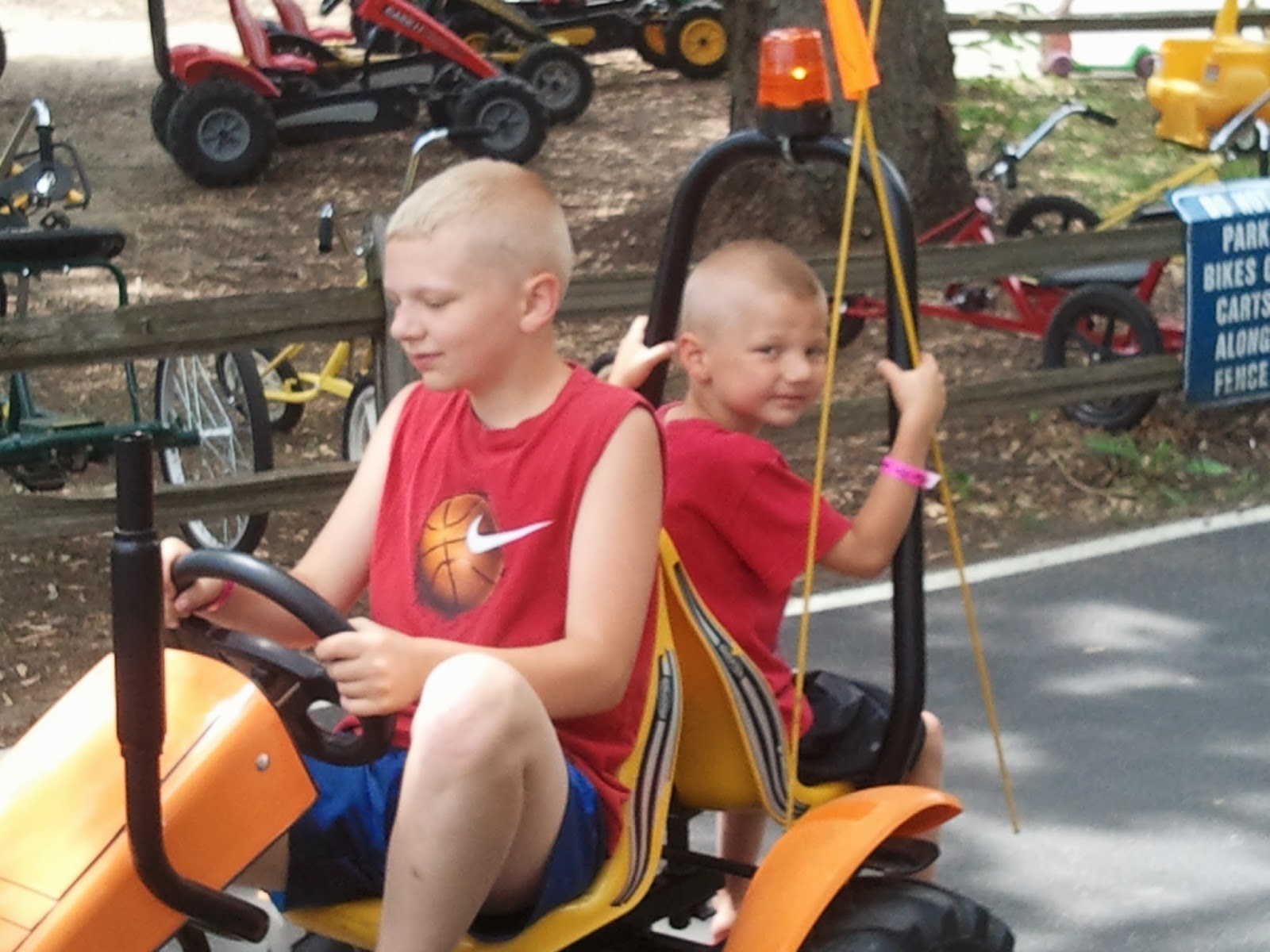 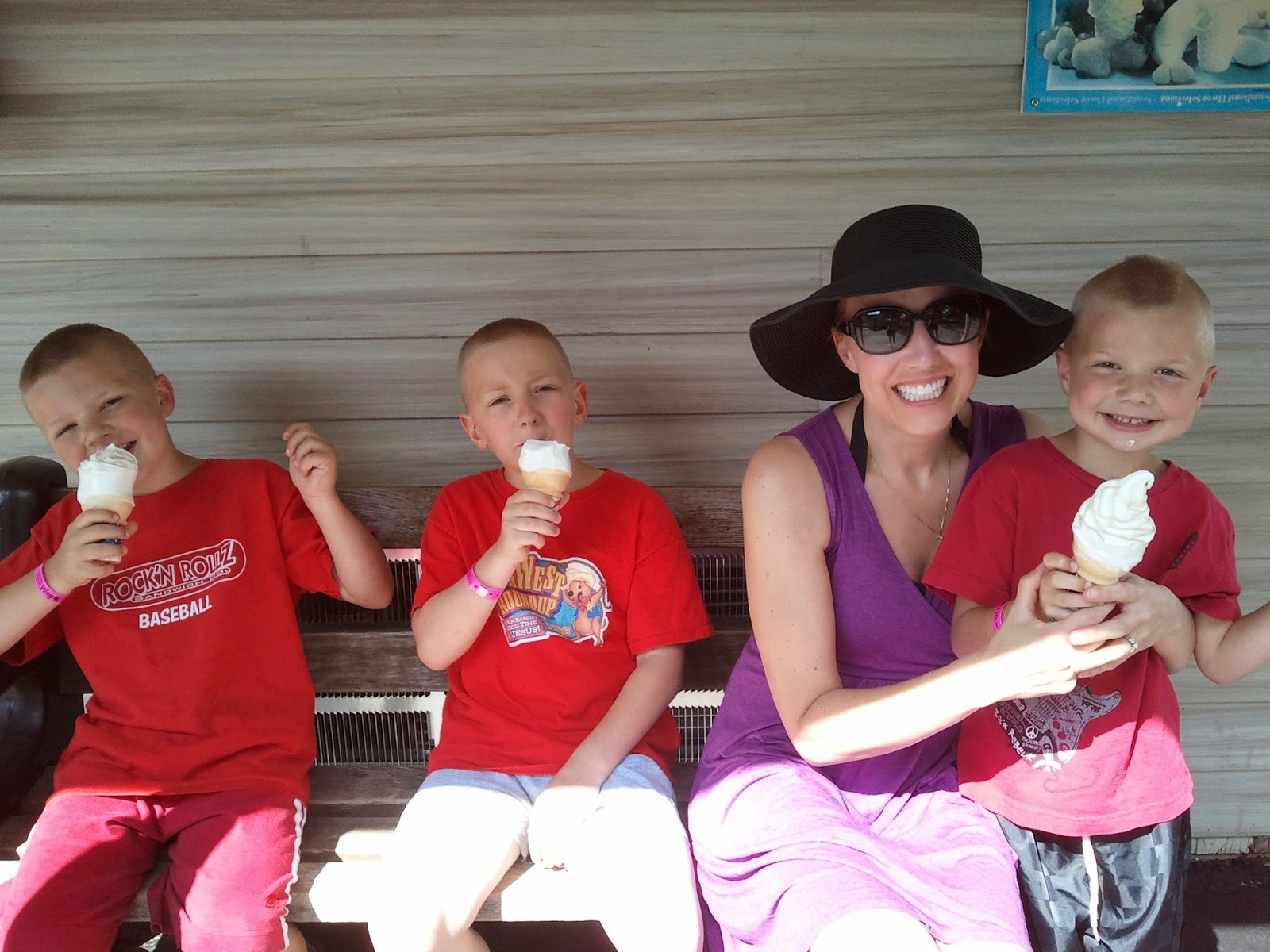 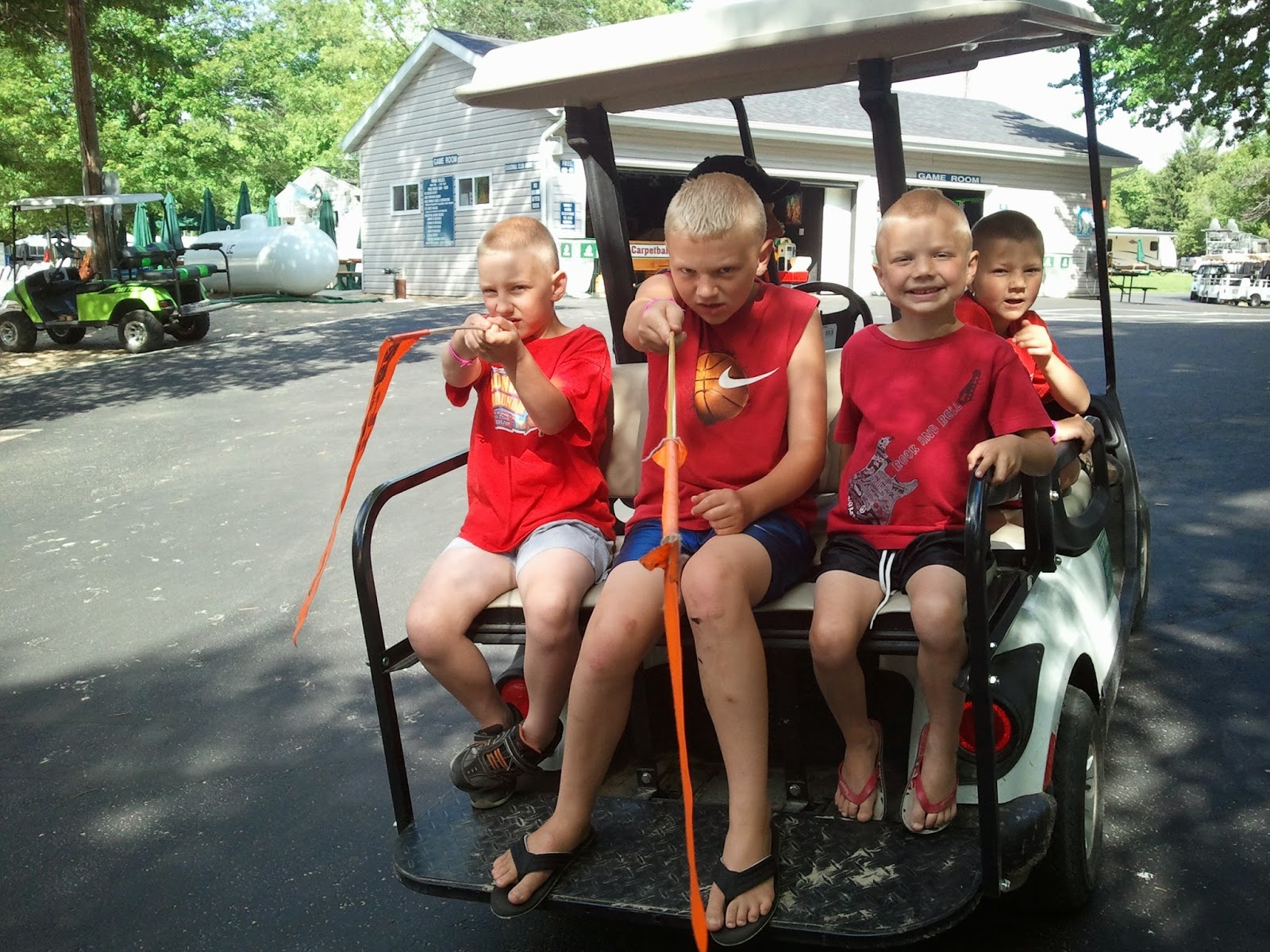 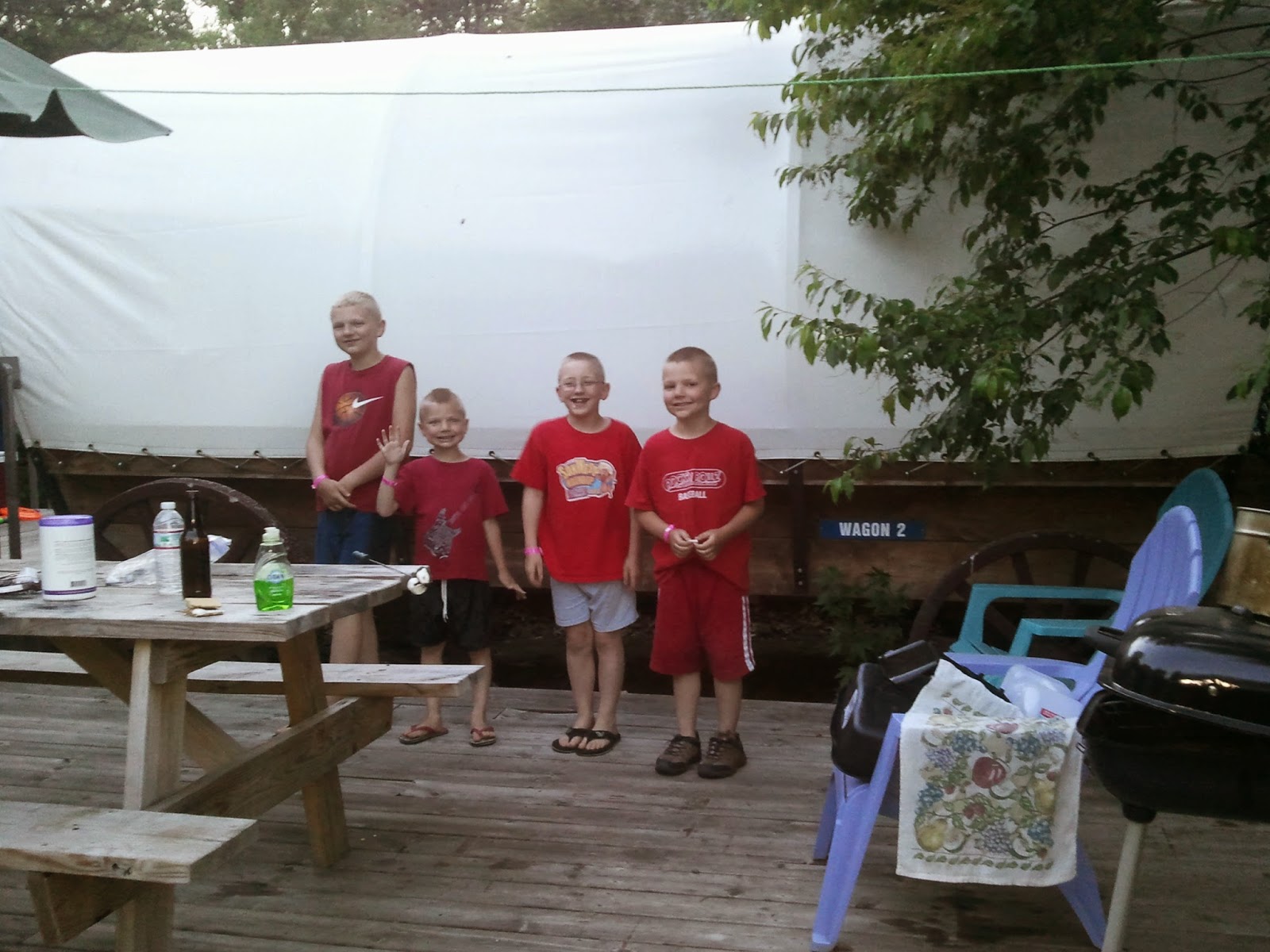 June was the month of camping for the Baierls.
We went to Devil's Lake, Smokey Hollow and to Crescent Lake Bible Camp all in 4 weeks.

Devil's Lake was deserted. It was wonderful! We rented a teepee the first weekend in June.
Due to the cold temperatures in the winter, many schools extended their school year to make up missed days. Not us! We enjoyed the campground at Devil's Lake while they studied.

The teepee was a cool experience. It is an actual canvas teepee built on a wood deck in a cul de sac area of the Ice Age campground.  It was a dogs' and boys' dream. Maddie enjoyed the room to roam as much as any dog would.  We enjoyed the military style cots that came with the reservation. It was a true memory.  Top that off with some boating, fishing, and swimming and you have an A++ camping experience. 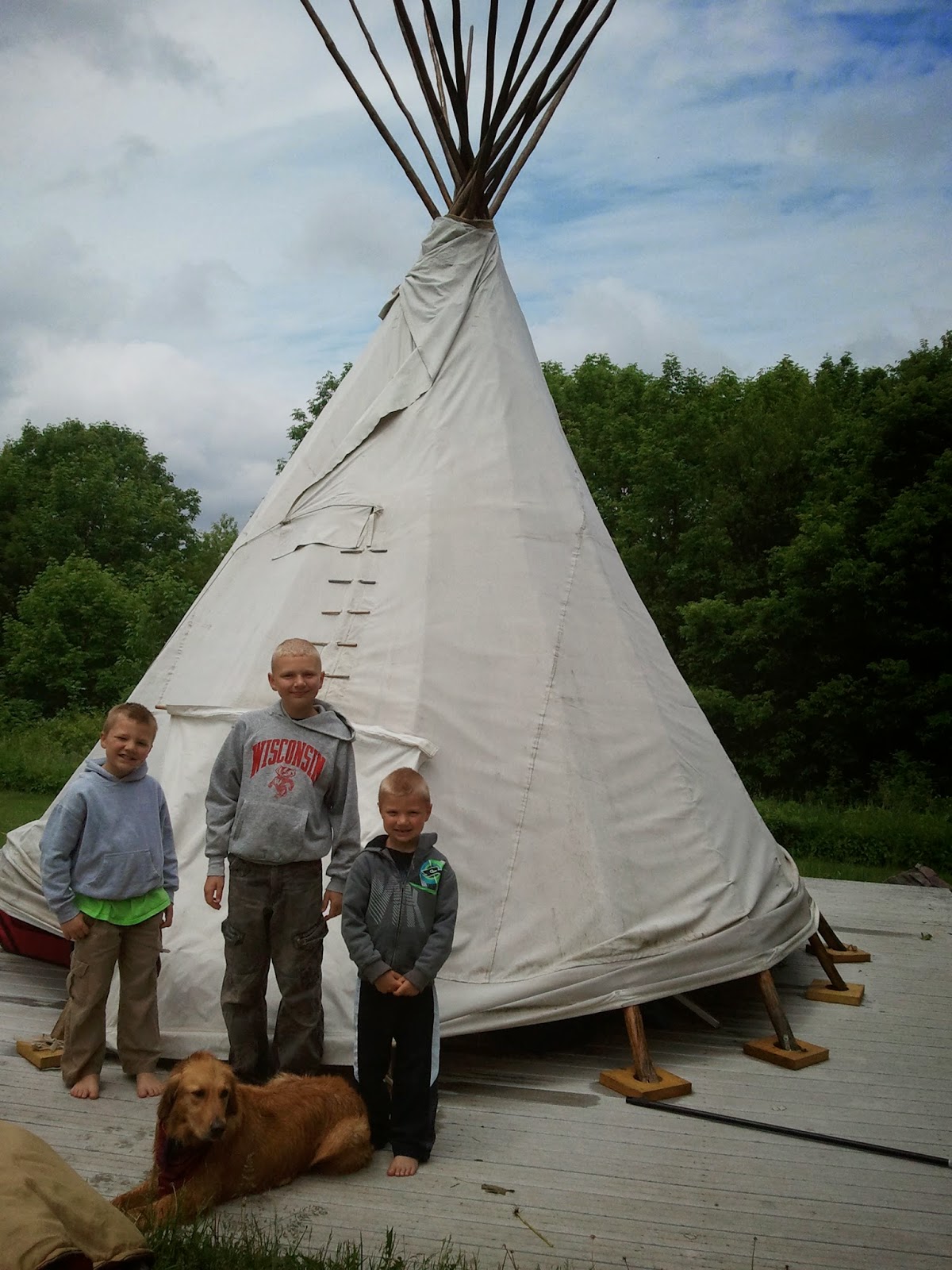 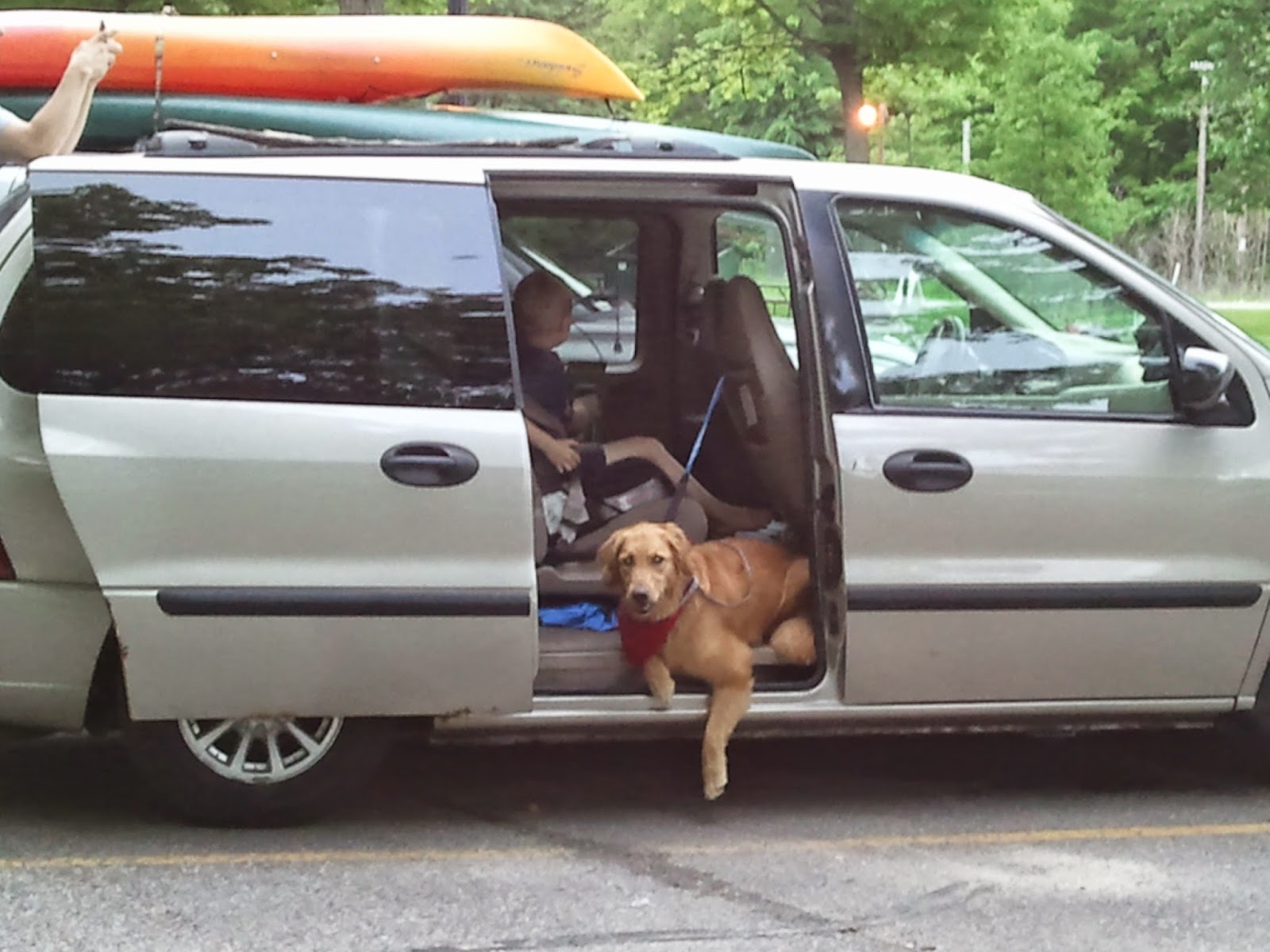 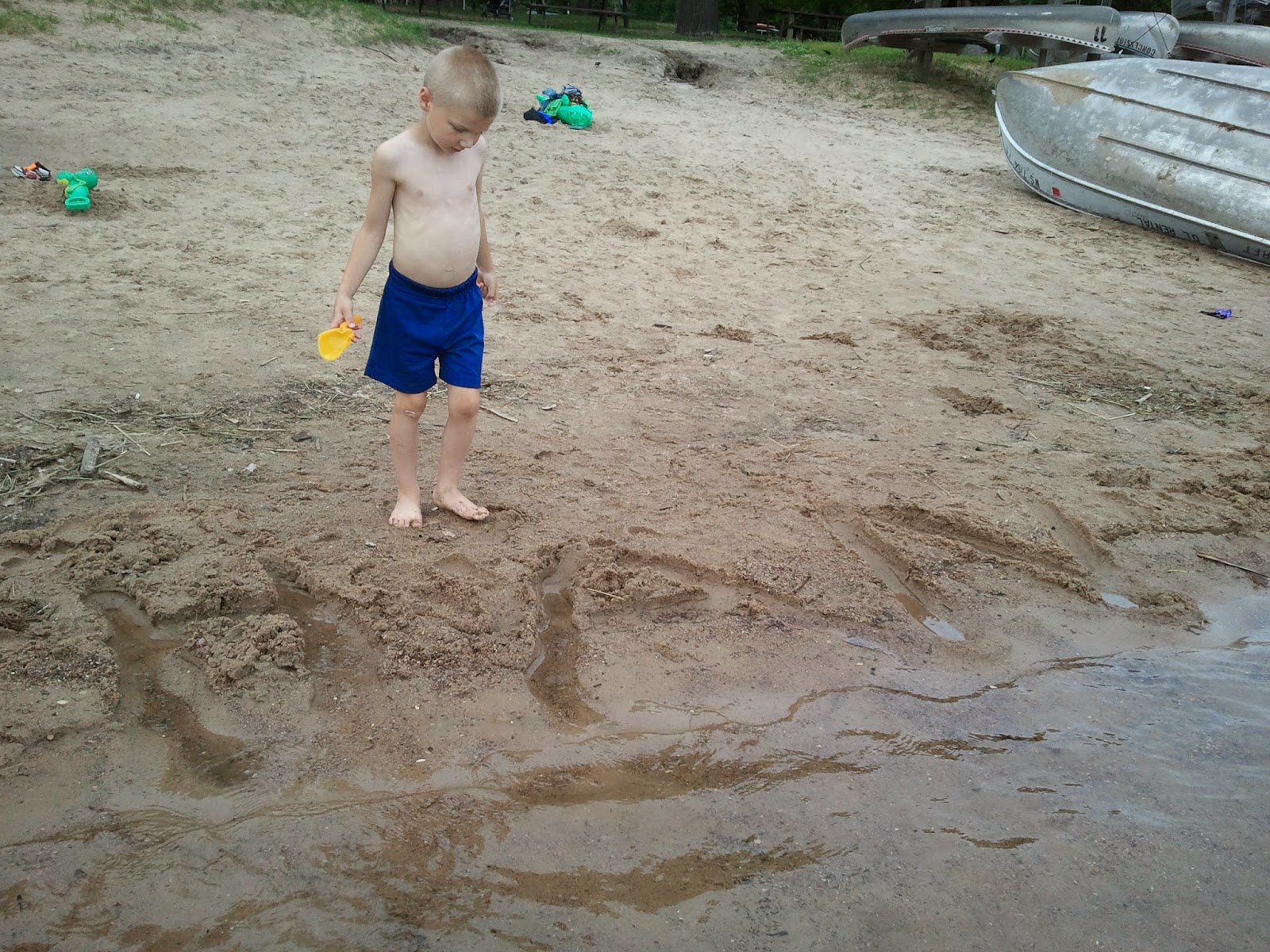 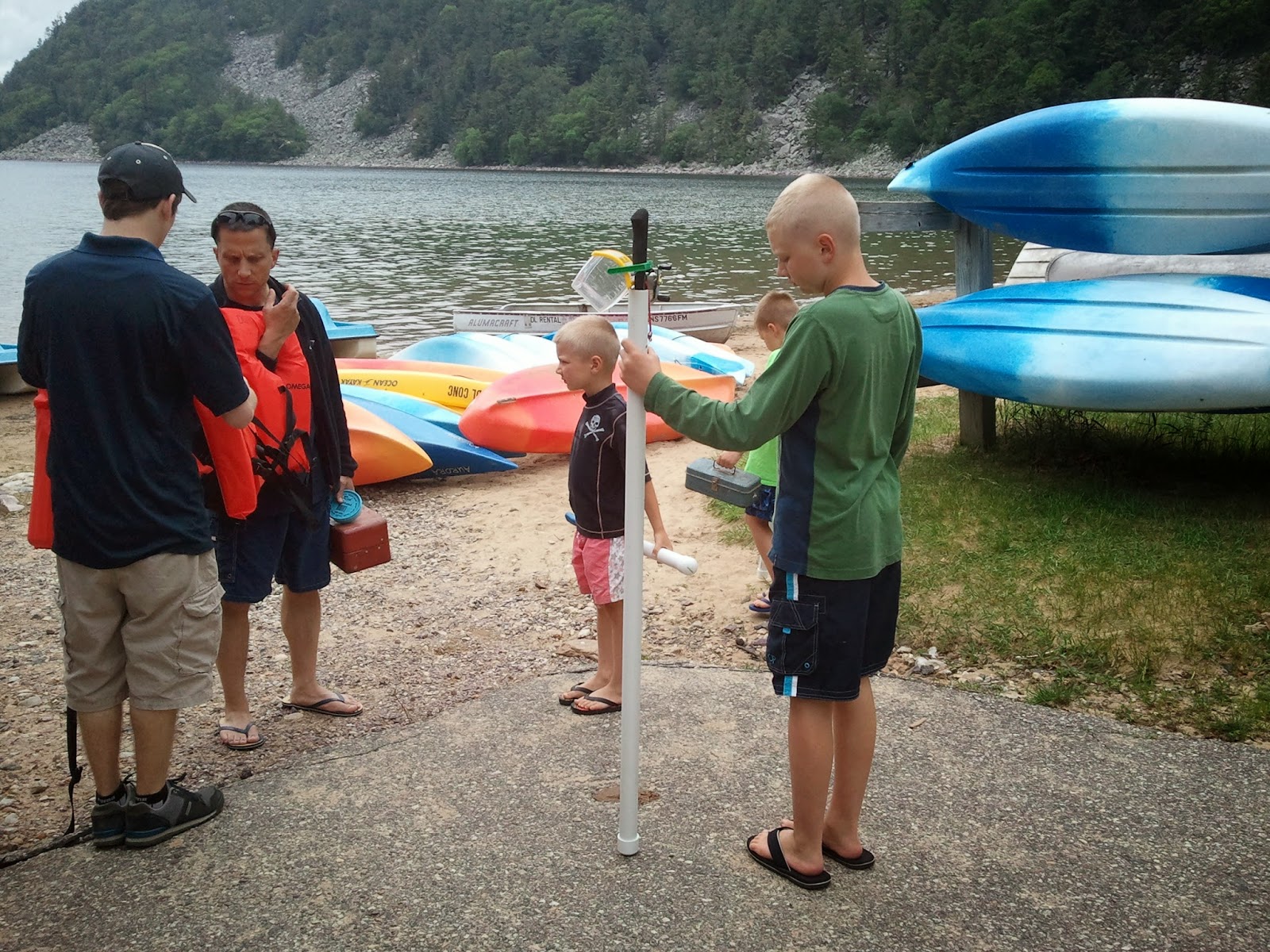 Last year I trained for the 5 k run (3.12 miles). I struggled thru the couch to 5k program on my own. It was really about turning 40 and feeling sluggish and out of shape.  I trained alone,but raced on race day with my friend Cassie. It was the highlight of my summer to see my boys waiting at the finish.

About 1/8 of a mile before the end David asked me:" Did you stop? Did you walk any of it?"  I said:" nope ran it all so far."  He replied:" YES! You're gonna do it mom! You're gonna do it!" and he ran the last bit cheering me on. It was a memory I have replayed over and over. GOAL!

It wasn't easy.  When the terrain got hard and uphill I spoke out: " Better pain than regret!" That worked to get me thru the rough spots.  It was an hour and 6 minutes of grueling jogging in humid summer weather but we did it! GOAL!  We smelled like the high school football bus. Blech.

No time to enjoy this moment as it was only 50 minutes until the parade my boys look forward to each year. I drive home and quickly showered and got to the parade in time. Whew what a morning!

I am in need of the next fitness goal. Any suggestions? 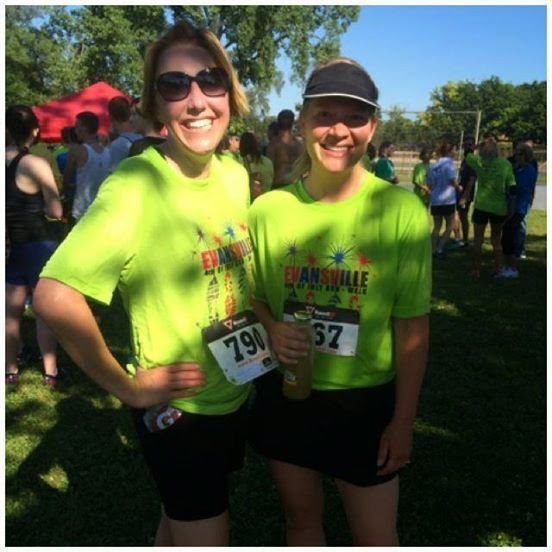 Caleb plays Fur Elise, Here I am to Worship, and 5 Position Waltz

After a year off from piano lessons, Caleb is back at it.
(Life is too busy with lessons: Bible, swim, piano, baseball, oh yes and all the school subjects!)


Here are a few piece Caleb has been working on for the past 2 weeks with his new piano teacher.

The first song is a portion of Beethoven's Fur Elise:
http://www.youtube.com/watch?v=y3Qv1bUfwPo&feature=youtu.be

The second is named 5 Position Waltz which moves your hand positions about the keyboard.

The third piece is a worship song he is perfecting called Here I am to Worship.