It is so nice to hear Christmas music fill the chilly mornings, especially when it is played by your kids.
It is really getting me into the Christmas spirit. :)

I just took out my bird, seasoned the skin and it's cavities and began to stuff the inside with celery.
I am reminded each year of Thanksgivings in the past as I prepare this year's bird.

Today I was reflecting on 3 memorable Thanksgivings from my adulthood.

The first Thanksgiving is one that I always remember.  I am certain that this moment will be one of the memories that flash before my eyes at the end of my life.

It was the very first time I ever prepared the holiday meal.  John and I lived in Maine and we were unable to return home to Wisconsin.  My friend Rasha and I decided it was time to undertake the planning and preparation of the feast ourselves.  I was 18 years old (21 years ago!) and we invited an army of Airmen from Loring Air Force Base to fill the large rectangular table. Many of our friends serving in the Air Force at the time were unable to return home and we were blessed to give thanks with them. True to Maine weather, it snowed over 12 inches that Thanksgiving morning, making the scenery beautifully white.  Inside Rasha's house we prepared 2 large turkeys and all the fixin's.  It took all day and we cheated and made stuffing from a box.  The pies were from scratch (Grandma Inga's recipie), the potatoes real and whipped, the cranberries were abscent, but we figured it was not necessary.  Boy did it smell wonderful in the kitchen.  Rasha and I fretted over how to get all this done with one stove and keep it all warm with 4 burners.  After a few minutes of deciding what dish went where, we decided it really didn't matter anyway.   Rasha and I layed out a table cloth and place settings from her mom's pretty white dishes, and began to welcome our guests as they slid into the driveway in the snow.  After all the GI's arrived, we began to bring out the feast.  What I wouldn't give to have a picture of that table and those who sat there.  I haven't seen most of them for over 15 years, including Rasha.  Now, I have served many guests a meal.  I have hosted many Thanksgiving dinners complete with all the fixin's, but never in my life have I ever served a more thankful croud than that first Thanksgiving meal.  I don't know if I felt that way because I had never before made the bird myself, or if it was because these men were used to governement prepared chow hall, but it was a day to remember. I don't remember having any leftovers that year.  Maybe we did and I don't remember.  More likely those guys ate it all gone.   Several of them needed to be shoveled out when it was time to leave, but we all agreed it was worth the effort.   I wonder where they all are today and who will be sitting next to them this Thursday. Thank you to the men and women who faithfully serve our country!

The next memory I have of Thanksgiving is the first time as a parent.  David was an infant and we got a "Happy Turkey Day" bib for him.  I fed him sweet potatoes from a jar and he ate it enthusiastically.  It was later when changing his diaper,that I laughed and laughed because sweet potatoes make your stool orange. Surprise!  Now we have 3 boys, but none are infants any longer.  I still have a baby spoon, but I don't have any more babies to serve.This is well with my soul.

The third Thanksgiving memory is unique and I was only reminded of it in an instant due to a distinct sound.  The sound of our neighborhood electrical transformer box popping.  From time to time an unfortunate squirrel will decided to chew on some of its wires and "boom" fried squirrel! The box that controls our elecriticiy is located in my next door neighbors back yard.  The grid for our street separates down the middle of the road.  Therefore my neighbors across the street are controled by a sepearte city elecrical box.  I just heard theirs blow and watched their lights go out, but ours are fine.  I laughed out loud because this happened to me 4 years ago when I had my bird halfway done on thanksgiving day.  I had 8 guests coming over and no electricity and a half cooked bird!  I never opened the oven.  Thankfully it remained hot on its own residual insulated heat and the city got our elecrticity back up on 40 minutes.  The turkey was fine and noone skipped a beat.  It was a tense 40 minutes though.  I thought just maybe we would be eating PBJ. Wouldn't that have been something?!

So this week as I review my list of things from which I am thankful, I will include those Airmen, Rasha, my 3 little men, and my working electrical box. (and many many more blessings!) For this girl is richly blessed and thankful.........
Posted by my3sons. at 11:17 AM 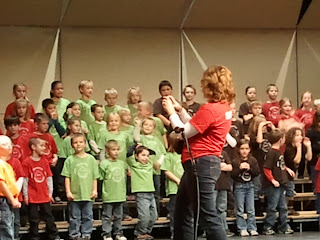 Caleb was very excited for us to attend his class musical.  His class had a dance to do in addition to the singing.  It was a Russian Troika dance.  Caleb was flung around in a square dance type dance with his 2 other buddies.  It was comical.  Everyone remained on their feet and we enjoyed watching them dance the Troika.

Caleb is in a green shirt, front row, farthest to the left.

The quarter has concluded and we received Caleb's first report card.
We also had our first parent teacher conference.

Caleb is doing very well.  His reading level is 5th grade! No surprise there. Hooked on Phonics baby! Worth it's weight in GOLD, I tell you!
His math scores were way above his schools average and the national average.
An interesting observation is that our school district has lover than national average scores in all subjects tested. Hmmmm... That isn't a good sign.

He struggles with being internally distracted. He is always thinking, thinking, and thinking.  "Hmmm what ingredients do I need to have to make solar panels?" Unfortunately, his teacher isn't finding this to be a valuable asset to the class. TeeHee.  One comment he got from is teacher was: "He needs to improve on his use of time."   I couldn't agree more. He is often in "Caleb's World" and couldn't really care any less about about the rest of the class or our family.   Caleb is truely his own unique little man. We are so very proud of him.
Posted by my3sons. at 11:12 AM

One Step Forward and ...

It is the story of being a mom.
After a day of homeschooling, running to guitar lessons, and getting a stop at Kwik Trip, I finally get to the housework.

I bought 3 gallons of milk for this week and a gallon of orange juice. Everything is in the fridge and the laundry is getting washed, dried and folded.  I sweep and mop. I put away the towels.  Within 10 minutes of having the floor washed and the towels put away, disaster happens.

My beloved son helps himself to a glass of milk.  He drops the full gallon of chocolate milk.  It busts wide open all over the clean floor.We use every towel  I just washed to clean the mess.  We have no more chocolate milk, no more clean floor and the towels are back in the wash.  Why did I bother? The store is still open, I imagine I will be running out for more milk now.......