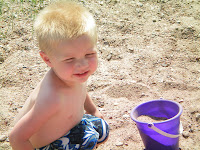 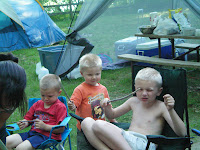 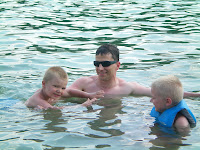 Caleb is really growing up fast. He is so much gusto. He was just flying thru the campground on his bike (still training wheels but he goes like lighting!) and gets up so much force that taking his left turn to our site results in a full fledge crash. Good thing he had on a helmet he told me later. Yes good thing!
Caleb at the lake was great too. He walked out with Zach's innertube and decided to lean on it like Samantha. Then he began to kick his legs and propell himself thru the water over to John. His smile was huge. He went in the water past the part where he could no longer stand and was so proud of himself. Then he got brave enough to do that with no innertube and really overcame some of his fears.
Both my oldest boys really dislike the water so this is really a huge deal!
Camping with the 3 boys was WAY easier this year than last. Everyone is now old enough to respect the firepit without a hundred warnings. Nathan is substantially more independant and Caleb is now in the big kids crowd. Whatever Zach, Sam and David were doing Caleb was keeping right up with them.