If you would've asked me which super hero Caleb is, I would've told you it was the Hulk. He has a similar short fuse and you really won't like him if he is angry.

Now,  I might say: "Move over Green Arrow, your predecessor has arrived".

Caleb has taken a serious liking to our bow and arrow.  He regularly sneaks off outside for some quiet "squirrel hunting".

If he someday runs thru the door exclaiming: "I got one!" I am going to be in a heap of trouble.  After all, we are big believers in the saying: "If you kill it, you eat it." 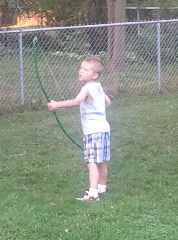