Lake Emily - our first camping adventure of the season

Memorial Day weekend we ventured to our beloved Lake Emily.
I am always amazed as to how skilled John is in packing all that STUFF into our van. We need a hitch a trailer and a maid. Poor Maddie had just enough space to lay down.  If she sneezed, she would've hit the seat bar. Lol. She was happy to be that close to her boy, Caleb.

Before getting to the campsite we needed to load up the van and head to the UW hospital for David's broken arm.   He had a followup xray appointment.  He is healing fine, but not fast enough for David.  His cast is Gigantic! It is bicep to palm and is very heavy and awkward.  Poor guy.

After the appointment in Madison, we had the great fortune to have the van break down.  So we find an auto repair shop, get everyone and the dog out of the van and "camp out" on the grass of a BP gas station with hot dogs, chips and lemonade.  Not exactly the camping adventure we had in mind but so is life.

A few hours and several hundred dollars later, we were back on our way.

We arrived at Lake Emily in time to enjoy the beautiful rain and thunderstorms. ARGH!

The next morning was clear for a few hours and I enjoyed the nicest hike with our beloved golden retriever.  She was on her electric collar so she was delighted to run free.  We went EARLY and encountered 2 separate snapping turtles lounging in the mulch and sand.  Boy was Maddie surprised.  She thought they were rocks.  HA. Best laugh I have had in some time.  I don't think the turtles or the dog enjoyed the encounter nearly as much as I did.  Later the boys decided to go "turtle hunting" upon hearing of Maddies misadventure. Thankfully for the turtles they were no longer in there. Our philosophy is if you kill it you have to eat it.  'Can't imagine how turtle would taste. Blah... :)

The afternoon brought more rain so we "camped out" in our van and watched Captain America with the cousins.  Thank you Brenda for bringing your portable DVD player.  A few hands of uno, a trip to the laundromat for dryers and the movie and we were back in business.

As a reward for staying thru the rain, we had the most beautiful Sunday at the beach.  We put a plastic bag over David's cast (no easy task -  did I tell you it is gigantic?!!?), blew up some inner tubes, descended down the 70 plus stairs and played the day away.  Even David got to float around a bit with his plastic covered arm resting on the tube.

I know this is the stuff the boys will remember.  It makes the 12 loads of wet laundry and sleeping bags, the van repair, and the golden retriever all worth it.  I am holding on to that fact with each check I write...... 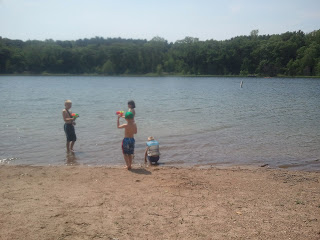