Caleb had a big birthday party this year.  As he grows his sphere of influence grows.
It was evident to us that even though he doesn't attend public
school, he certainly isn't socially deprived. We limited his number of party
invitations to 8 kids. With our 3 kids added to the number that makes for a big boy
festival!

He wanted to have an Angry Birds game activity, so we used our old
cardboard building blocks.  It has been awhile since those were played with.
We set up my exercise band as a slingshot.  David tied the band to the banister at the top
of the stairs and the top of the railing.  Believe it or not it worked really well.  Then we
set up the stuffed pigs and stuffed birds Caleb had from Christmas to make a real version
of Angry Birds.  What a hoot!

In addition we borrowed a couple more Bey Blade stadiums and had a Bey Blade
tournament upstairs.  Time passed quickly, but not quietly.  It was a lot of
activity having 11 boys party for 2 hours.

Caleb turning 7 makes my boys all at perfect ages.  I wish there was a stop time button.
I would push it right here with boys aged 10,7 and 4.  This right now is the "good 'ol days."

Tonight as I put the boys to bed I looked at the ceiling and almost started to cry.
I hadn't noticed the glue splotches in some time. But low and behold there they were.
A small painted over glue bumpy spot where the old baby mobile and wall appliques
once were over the crib.  sigh.... This morning as I was exercising I listened to a song named
"I want to do it all" by Terri Clark. I love this song, it makes me feel so blessed.  She sings
how she wants to do it all in life.  I marvel at just how many things she wants to do I have
already done! One thing she says is that she wants to do is "settle down with the love
of my life, rock little babies to sleep at night..."
I heard that line from her song tonight looking at that crib mobile splotched ceiling. 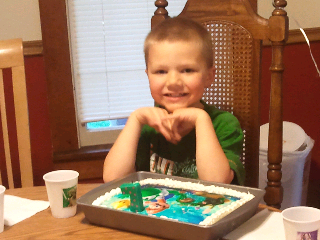